They travel over the Great Divide of rugged mountains high
Sure footed for the treacherous mountains where danger lies
All the feed is scarce, with the drought now in their midst
They travel for many miles a day encountering many risks 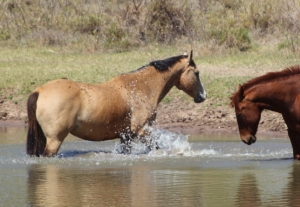 They shoot them from the skies and with no thought to where they aimed
Over grazing they say’s the cause, for this undignified way, they blamed
But I know that God sees the truth and one day he will return to claim
His magnificent courageous spirited brumby that man has slain in vain

Because of greed and hate of man they over take without heart or soul
They kill the earth for pleasure not worth, don’t care ’bout mare or foal
And when God’s heavens open up man will surely regret the day
That he destroyed the beautiful brumby that God in all his glory had made

This work may not be copied or re-used without permission of Julie-Anne Avenell.